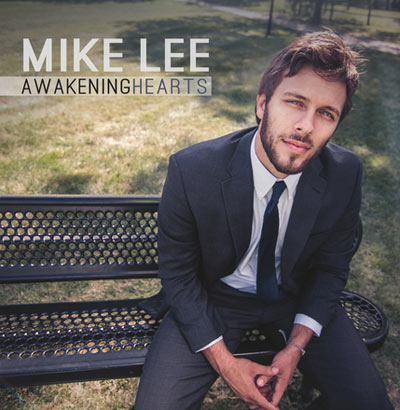 Fort Wayne, IN (March 31, 2014) —- Worship artist, Mike Lee, is poised to release his first national project, Awakening Hearts, May 1st. The 5-song EP features new, original songs from the talented singer/songwriter and was executive produced by Ed Cash and co-produced by Scott Cash and Cody Norris. Recorded in Franklin, TN, Awakening Hearts prevailing theme centers on Ephesians 1:13-14: “In him you also, when you heard the word of truth, the gospel of your salvation, and believed in him, were sealed with the promised Holy Spirit, who is the guarantee of our inheritance until we acquire possession of it, to the praise of his glory.”

“Awakening Hearts, is a celebration of the witness of the Holy Spirit, and a call to wake up and respond,” says Lee. “When we hear and believe, the only appropriate response is to wake up. It’s a sensory, emotional response when we hear the Word of God; ‘Wow, I’ve heard the voice of the eternal God, and this is entirely new.’ That’s the heart of the album right there.”

After a two-year collaboration with the Cash brothers and a successful kickstarter campaign that nearly doubled the original goal, the worship leader from Fort Wayne, IN has delivered a solid, creative project. The EP launches with the rousing song, “Different,” that describes how God is different than the world and the power that brings; while “Salvation Come,” is an anthem on how walking in faith is held strong by the promise of the salvation to come; and the project concludes with the ballad, “Waking Up,” which spotlights on how faith wakes up our bodies and makes everything new to the believer.

While music is the base of Lee’s ministry, he also has another unique outreach of sharing the gospel through mixed martial arts (MMA). Lee and his three brothers have their own gym, Lee Brothers Submission Academy, at Liquid Church in Fort Wayne, the same non-denominational church where Mike Lee leads worship every Sunday. Lee has had personal experience of seeing the word of God having an impact on the mat.

“When guys come in here and experience the love of God through people who understand the art and care about them, the change can be seen immediately,” explains Lee. “For me and my brothers, there’s no divide between the idea of ministry and the MMA.By showing the love of Christ, no matter what we’re doing, can transform lives.”

About Mike Lee
Born and raised in Fort Wayne, IN, Lee comes from a musical family and started his own music journey at the age of fourteen, when he picked up his dad’s guitar and started playing. At the same time, Lee started jotting down his spiritual thoughts that became the early stages of his songwriting career. Shortly after that, Lee began leading small group worship with his twin brother, which led to leading prayers meetings and early morning worship throughout northeastern Indiana. Lee became a youth worship leader while attending college, and graduated with a Bachelor’s Degree in 2010. A year later, Lee became the worship leader at Liquid Church in Fort Wayne and in 2012, he formed a band and started performing his own songs regionally with great success. After sharing the stage with such artists as, Sidewalk Prophets, Audrey Assad, Love and the Outcome, and Hyland, Lee collaborated with Ed and Scott Cash for two years before recording his first national release, Awakening Hearts, in Nashville, TN. Lee is married and his wife, Michelle, performs with Lee’s band and manages his career. They have one son, Preston, who is two-years-old.